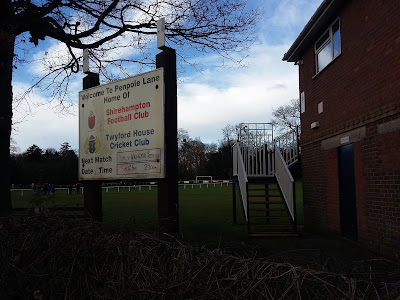 It's frankly criminal that I've left it this long to go watch a game at Penpole Lane. Located on the edge of Shirehampton Woods, Shirehampton's ground (which they share with Twyford House Cricket Club) is a brisk five minute walk from my flat. With Rovers away in Rochdale I decided this was going to be the Saturday I took myself along to check out my most local side.

Since I've lived in the area Shirehampton have been quite a strong side in the Somerset County League, winning the Premier Division by 10 points in 2014/15 and reaching the final of the league cup and the GFA challenge trophy, which they lost to Bridgwater Town Reserves and Bristol Manor Farm respectively. Wrington Redhill (from the Somerset village of Wrington) first came into the Premier Division in 2014/15 and have finished in 9th place in both their seasons so far. Why Shirehampton, based in northernmost Bristol, finds itself in the Somerset County League as opposed to the Gloucestershire County League which is full of Bristol teams is a mystery to me. 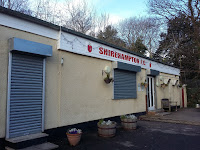 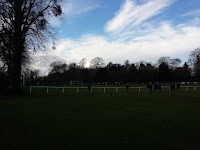 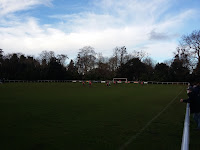 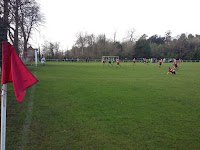 Another reason I chose to come to Shirehampton was that I knew I wouldn't have to write much about the ground itself, at this level there isn't really much to say. Penpole Lane is a basic white metal railed field with only a small metal stand by the stone dugouts to provide shelter from the elements. Due to the end of Twyford House's season clashing with the start of Shirehampton's, the football team had to play their first seven games of this season away from home. A sign of the adjustable nature of the ground are the plastic railings that line the side of the pitch closest to the changing rooms, presumably so they can be easily removed to covert the place to a cricketorium.

Weirdly the clubhouse is about a minute's walk from the pitch itself, so the club uses a shipping container halfway between the two for corner flags, goal nets and the like and the cricket club's changing rooms and tea hut during the game. The attendance was approximately 42 today and I was too shy to venture into the clubhouse on my own after the match, especially with my house just down the hill. On the whole Penpole is a very pleasant place to watch football, it's gloriously leafy and was very picturesque towards half four when the light began to fade.

The downsides I can see are the lack of shelter from the weather; I certainly wouldn't want to come here on a Tuesday night in January and the difficulty Shire would have meeting Western League grading whilst sharing with Twyford House should they wish to push on at some point in the future. You could add seating and floodlights easily enough if you had the money and the ground is already nearly what you'd consider enclosed but you need hard standing to get into the Western League and it's hard to see how Shire could achieve that without ruining the place for cricket. 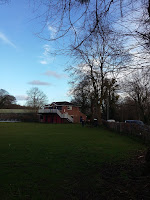 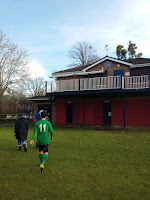 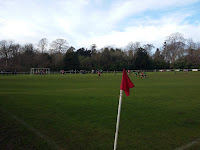 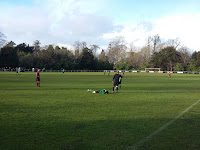 Compared to the Premier League game I'd seen earlier this week this was a much more rough and ready demonstration of the beautiful game. Shire got two weak shots off early doors but the Wrington keeper caught both with ease. It would take a ball whipped in from the wing and a shot across the ground into the bottom corner to undo this pink shirted dynamo at around 10 minutes in. No sooner had I jotted this down on my phone and looked up again, Wrington had possession of the ball in the Shirehampton box and hit it towards goal. The resulting strike bounced off a defender and over the Shire keeper into goal. Evens.

It was the home side who would regain the lead before the break in spectacular fashion with three quick-fire goals. In the 32nd minute they pushed forward and completed a well chosen pass to one of their forwards who smashed it past the diving keeper. The third came as the ball was whipped out to the right wing to a player who had a wealth of space to cut in and slot home from an angle. I know there was a 4th goal before the break but I haven't written down anything about it. Je suis un journaliste. Quality was in limited supply compared to what I'd seen on Tuesday but Shire were good at passing back to the keeper in order to snuff out danger and for most of the first half Wrington didn't really get a look in. They were also good at making space for themselves in attack.

It should be noted that this pitch had no sides and there were no ball boys, so whenever a stray ball left the pitch (often) the players were entirely at the mercy of the dawdling old boys in attendance to retrieve it. The level of crowd player interaction at this level is a joy to behold, with players walking and chatting with the crowd as both made their way to the tea hut and changing rooms at half time. 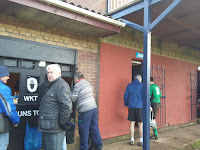 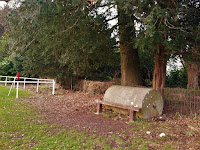 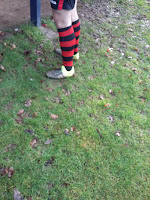 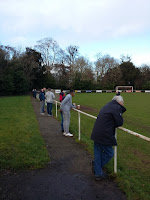 It's been a while since I've been able to include one of my favourite segments of a Partizan Bristle review: random overheard nonsense. It just hasn't presented itself as much lately but there were two absolute doozies today. One came as a Wrington player lay writhing on the floor after a crunching challenge from an opponent. I wouldn't like to say whether or not the challenge was legal but as the ref was assessing the clearly in pain player a man stood right by them was repeatedly saying things along the lines of "You can't penalise perfect tackles ref. You'll never see a better tackle than that. Perfect tackle ref and you know it. Dear oh dear." Methinks the fan doth protest too much.

The other moment came as I was waiting to get a coffee at half-time. As previously mentioned the tea room is located right beside the changing rooms and shortly after I arrived, so to did the last of the Wrington players and their manager who said, fairly calmly, "alright get in there and close the door." What followed was the most almighty bollocking that would make Jürgen Klopp himself want to go off into a corner and think about his life. The gaffer's voice was too angry for me to clearly make much of it out but one thing I did hear towards the end was "and no it's not the new formation's fault!"

Back out for the second half and the weirdness continued as a Wrington defender started taking goal-kicks for his keeper. Being a relative newcomer to football I had to text Daz to check whether this was allowed, he said it was technically but he hadn't seen it since he played in competitions as a kid. By now I'd moved to behind the dugouts and was delighted to see that the assistant manager for Shirehampton, a small bald man with an incredibly gruff voice, was smoking a cigarillo as he barked instructions to his players. What a don. 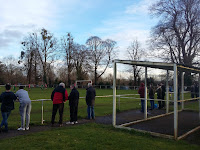 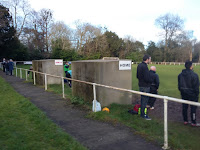 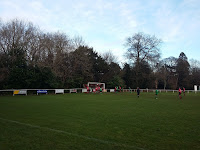 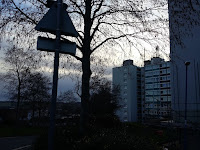 Early on into the second half Wrington clawed one back through a penalty and the bollocking at half-time must have worked because they scored the next goal too, making it 4-3. A corner from the away team wasn't dealt with and was sort of scrambled into the net between several green shirts. According to the lads standing next to me, this was "so Shire". Wrington very nearly drew level from a free-kick about 15 yards out but the keeper managed to hold onto the powerful shot. Shirehampton managed to take the pressure off themselves when a forward was played through into a one-on-one with the keeper and slotted into the bottom corner. Shire almost followed this up with the perfect free-kick, which curled beautifully toward the top corner leaving the keeper for dead but in the end drifted just over. However they followed this up by missing an open goal, so you know, still anyone's game.

At I'd guess about 80 minutes Shire get a bit clinical as the ball is wrestled away from the Wrington midfield by a portly substitute midfielder and crossed into the middle for one of their strikers who unleashed an absolute rocket which pinged off the bottom of the crossbar and into goal, making it 6-3 to the home team. The last action of any note was from the poshest named duo in non-league football; as a Wrington player called Jerry hit the post causing the ball to roll slowly across the Shirehampton goal line. It was eventually palmed out by Shire's keeper but only as far as another chap named Rory who struck from close range but hit the crossbar somehow. In all honesty from where I was standing I think it was probably a goal the moment it came off the post but there we go. Can't ask for goal line tech in the Somerset County League.

On the whole I had a nice afternoon watching Shirehampton. Penpole Lane is a pleasant ground and they don't charge an entry fee, so if you're local go along and buy a few drinks.
Posted by Unknown at 17:17

"Some people would write about the football but that's not your style. You prefer to write whole paragraphs about how a particular bit of wood on a stand made you feel and I suppose you have to admire that." - Michael Southan, playwright and Wolves fan.
"Good stuff. I read it on the loo the other day." - George Bowerman, local oaf.
"I just lost two minutes of my life reading this crap." - A Yate Town reserves player's Dad.
"I mean, you are basically a trainspotter aren't you?" - My Mum.

Buy me a beer: